As usual, when we take a break, there is the usual catch up to do with website, washing etc but eventually we escaped the hotel and had a wander around Puerto Natales and found a VEGGIE restaurant for lunch.  JC spotted it, he said it had “vegetarian style writing” on the sign outside – work that one out if you can!!  The town reminds us a little of Fairbanks in Alaska with its wooden and metal homes it really looks like an old frontier place.  Here too they are suffering from the recession – the lack of tourism is very apparent in the empty restaurants and hotels. The BIG bonus for JC, after having to suffer in a VEGGIE  restaurant with organic beer, was that he is back on the King Crab.  All of you rally guys will remember them from Alaska – now he is having them here in the Southern hemisphere in the same year!  Fish and Chips in the UK will never taste the same!!

As we left Puerto Natales, the good news was that the road was paved – heaven - but the bad news was that we had left the icefields, mountains and wonderful scenery behind and flat bleak plains with sheep, sheep, more sheep and stubby forests, covered in “old man’s beard” were all we could see for miles.  You can tell which way the wind blows out here as all the trees bend in the same direction.  They even had a “Monument to the Wind” – who needs reminding of it up here?? The only protection along the road were the funny looking bush shelters.

Along the way, we spotted again the roadside shrines, surrounded by heaps of plastic bottles filled with water.  We are not sure what this is all about.  JC thinks he saw them in Micheal Palins “Full Circle” and it is something to do with providing something for the spirits to drink. If anyone has read it – let us know!!

Punta Arenas will be our next stop, this is only the second place we have visited before this trip.  In January 2005 we came here to start a boat trip through the  Magellan Straits and around Cape Horn.  The town seems to have expanded since we were here last or maybe we have just got used to so many small towns along the way.  In the city centre and the square Plaza Munaz Ganero there is a monument to Ferdinand Magellan.  The story goes that if you rub the toe of one of the Indians on the monument (and its shiny big toe is evidence that many people have) you will return again to Punta Arenas.  We did it before in 2005 and here we are again.  JC rubbed again – just in case you never know we may be back again sometime.

The streets were filled with travelers waiting for a boat, I suspect, and locals going about their Christmas shopping.  We were entertained by a group of small children wandering around singing Christmas Carols in the street and had lunch at Lomito’s where two chefs work like one armed paper hangers to keep up with the demand for their steak sandwiches, served on huge plate-sized bread rolls or “stotties” for all of my Geordie friends and family.  At only 3 pound for a sandwich and 1.60 for a pint of lager, I had trouble prising JC out of there. One strange item on the menu,however, was the “fried silver fish” For anyone living outside of the UK, the reason this is strange to us is because “silver fish” are small insects which live in the damp parts of our houses, usually under the carpet!!!!!! 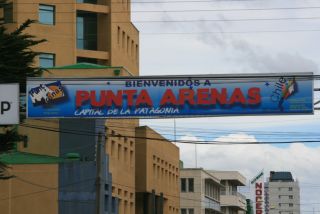 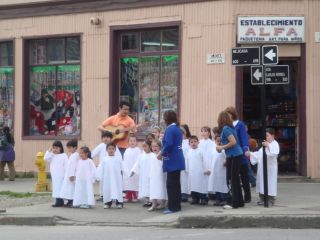 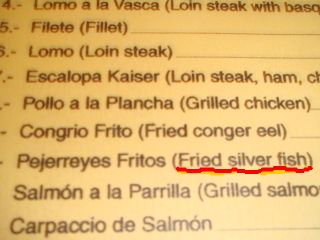 Sad though it may seem, the city’s cemetery is one of the tourists top highlights.  It covers four blocks and the tombs and graves amidst the immaculately clipped cypress trees tell stories of the many European immigrants who settled here in years gone by.  There’s even a map posted at the gates and each nationality seems to have its own sector.  Everywhere is beautifully tended and some tombs have even been decorated for Christmas.  This may seem a bit bizarre to us all but it reflects what we saw on All Saints Day when fresh flowers were laid, headstones, were polished and there were many families spending time together at the cemeteries remembering their loved ones.

We decided against taking the Punta Arenas ferry to Porvenir as on Saturdays the only sailing is at 1530pm arriving at Porvenir at 1900.  The ferry from just outside Punta Delgado was only about 120kms north and it runs every 90 minutes, taking just 20 minutes to cross, so we went for that and were on board by 12.15.  The café at the ferry has obviously provided shelter against the winds for many who have travelled to Ushuaia, with stickers from all over the world in their windows.  The small ferry came in sideways on against the wind and as we waited other long distance travelers joined the queue, including two couples from Germany and Austria and their young children!  What an adventure it must be for those kids.

This ferry takes us onto Tierra del Fuego and the final stretch of our journey to the Bottom of the World – we suspected that there would be more Europeans in Ushuaia for Christmas than Argentinians -  a fact confirmed later by the queues of people waiting to cross into Chile at the border post.

Then we arrived at the Chilean border and the mass exodus of Argentinians.  We joined the queue, expecting to have to wait some hours, then followed a crafty, well travelled French couple who joined a much shorter queue for people coming in by bus.  Despite having four more passports than people listed on the bus, the friendly police officer stamped us out of Chile with a smile and we were quickly heading back to the Toyota.  Then, as we started her up the main tank empty light flashed and the gauge showed EMPTY.  We had only filled up 100kms before that and immediately thought that the tank had been damaged or a pipe punctured on the rough road B********.  Switched to auxillary tank and headed for our next queue into Argentina – much shorter and when we got back to the vehicle JC checked underneath – no signs of leaking Diesel.  Started her up and switched back onto the main tank – all was well – gauge showing fuel.  It’s a mystery – all we could think was that something had got stuck when we were bouncing around on the gravel and had subsequently freed itself!!!  BIG SIGH OF RELIEF!

As we drove through the barrier into Argentina the final frontier – the policeman shook JCs hand – “Well Done – You Made it!!!!”  In the distance we could see the Atlantic Ocean for the first time in many months and headed for Rio Grande  where we stayed at the Posada los Sauces hotel – great place, friendly staff.  Have to admit we were a bit apprehensive about what kind of reception we would get in this town, where there are many memorials to the soldiers killed in the Falklands War but we need not to have worried.  We were made to feel very welcome at the hotel, the police helped us to find our way out the next morning, and a young couple following us along the road, were pipping, waving and cheering us on to our last leg of the journey.

With only 198kms to go we stopped at a police check where they told us it was snowing up ahead in the mountains – can you believe it.  Maybe we would have a white Christmas after all.

Although there was an obvious light covering of fresh snow on the mountain tops, we didn’t actually see any falling along the way.

It was a strange feeling coming in to Ushuaia – part elation that we had made it and part sadness that our journey is coming to an end.  After the usual photo stops we checked into our hotel and went off to celebrate at a small bar on the waterfront where they even had Warsteiner Beer!!  A few drinks too many later – hey we have earned it – we went back and had  a “night in” watching movies – might sound boring to all of you but when you are doing a trip like this its an absolute luxury!!!

The plan now is just to relax here over Christmas before returning North to Buenos Aires and our ship home.  It will certainly be a “different” Christmas for us here.  It’s a bit like Juneau in Alaska – the Antarctic cruisers come in for a few hours and the town is full of visitors, then they leave and the place is empty.  No worries I am sure we will have plenty of Champagne and Beers to get us into the Christmas spirit!

Cheers Everyone – Have a Wonderful Christmas!!!!!