We had a late start today as it took JC over 1.5 hours to wash off the vehicle, but the good news is that we only have one real chip in the paint work ñ not bad after 1000 miles of sand, gravel and mud! Added to Paul and Nikkiís birthday present ñ just so that people wouldnít wonder why we are now going in the opposite direction.  Our target destination was Haines but in fact we only made it to Haines Junction via the Alaskan Highway again.  Not a great road and lots of roadworks.  You rallyerís will know how long you can wait at a STOP sign on these roads.  Saw a poor cyclists trying to cope with the dust from a vehicle up ahead ñ rather him than me!

Still watching for bears we were not having much luck but saw a lovely family of ducks at Pickhandle Lake, some wild horses at the side of the road and finally some real wildlife when a wolf came walking towards us!

We are definitely back in RV country ñ there are loads of them on the road.  The sad thing is that they have changed the face of the highway.  All along the route we see small cafes, diners, motels and cabins that have been closed down.  Probably because these huge camper fill up with fuel and food at Fred Meyers (Alaskan equivalent of Tesco) and are totally self sufficient ñ even down to the air conditioning which kept us awake for most of the night on tonightís camp site.  Pity the poor cyclists and bikers who have no place to stop for coffee and a bite between Beaver Creek and Burwash Landing.  We stopped at Burwash Landing on Kuane Lake and met a couple from Sleaford!  They had spotted us at the border and wondered if they would ever catch up with us ñ they are travelling around for about 5 weeks in a hire car and having a great time.  No wonder the cafes have all closed down around here ñ we had two toasted sandwiches, a kitkat and some very very old chewing gum and paid over 8 quid ñ scandalous!

I think we are both feeling a bit deflated today after the last couple of days and we are being quite dismissive of the scenery, although, despite the weather it is still quite stunning.  Along the road side we spotted a Tinglit grave (Indian) with headstone, totem pole and various carvings all around it ñ very unusual.

We lost an hour today and with the late start, we stopped at Haines Junction, where after nipping into a local hostelry for a bottle of wine in a bag we set up camp for the night and met Karen and Ron from Vancouver Island.  Great, fun people, Ronís job involves the research and monitoring of the acitivites of the spruce bark beetles which have devastated the forests in Alaska and Canada over the past eighteen years.  Karen comeís along on his field trip during the Summer and they were very helpful in helping JC to prepare a route from Skagway to Calgary, although we do hope to get a ferry to Prince Rupert which will save us a lot of driving.  Ron rated our chances of getting on the ferry as very low at this time of the year, particularly as we had no reservation and would need a cabin too.  Letís see how we get on.  We also learned of a bunch of Irish lads who had passed through a couple of days before us, cycling South to Chile to raise money for children with aids in Africa ñ wonderful and another couple who were cycling from Prudhoe Bay to Argentina with their twin boys, who they are educating en route!  It is definitely good to know that we are not the only crazy travelers out here! 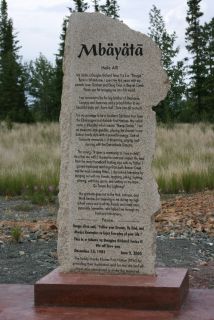 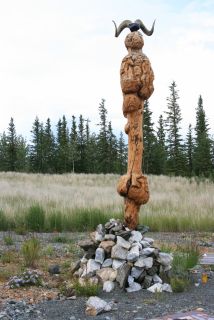 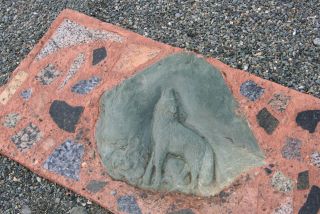 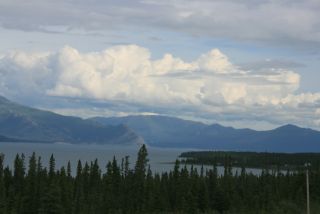 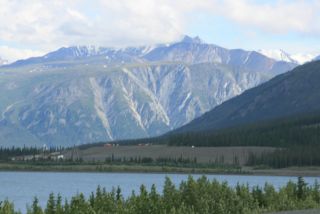 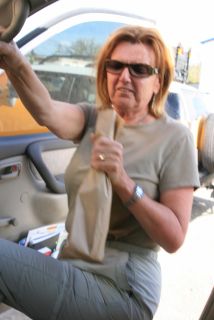 It had rained heavily in the night and low clouds hung over the mountains as we headed along the Haines Highway, leaving the Alcan behind us once again.  A very quiet road, only half a dozen cars passed us in over 250kms.  At the summit  the temperature had dropped to only 9degrees and I was shivering in my shorts.  As we came back into the USA, the customs guys, who were soccer fans, spent some time chatting with us about HULL CITY ñ who would have believed it.

We got our hour back today ñ back on Alaskan time and as we drove into the Valley of the Eagles we spotted fish wheels, fishermen but no eagles ñ apparently during October/November there can be up to 1000 Bald Eagles waiting in the trees along the riverside fishing for chum salmon ñ that must be some sight ñ there are viewing areas all along the river.  In Haines, we headed straight for the ferry terminal to see what we could do and despite all odds, we managed to get a ferry to Juneau tomorrow then a ferry on to Prince Rupert, with a cabin, two days later.  What luck!!  No-one expected that we would just be able to roll up and get on board, especially Ron and Karen!  The guys in the booking officer, were a credit to the Alaska Marine Highway, courteous, friendly, helpful, knowledgeable and interested in our joint (if very different) language i.e. bonnet vs hood and boot vs trunk!! When we asked them the best place to see bears they advised us to cover ourselves in fish oil or honey and go sit in the woods ñ ìthe bears will soon find you!î.  Donít think so.  Seriously though, they directed us to Chilkoot Lake where we should be able to see bear and eagles. 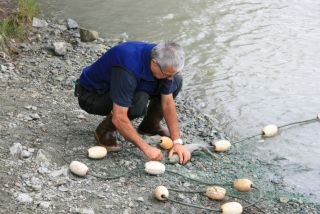 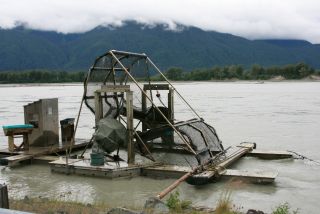 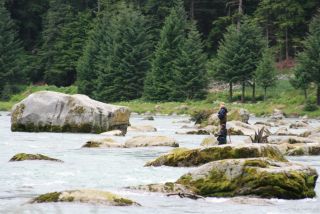 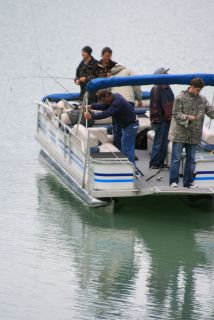 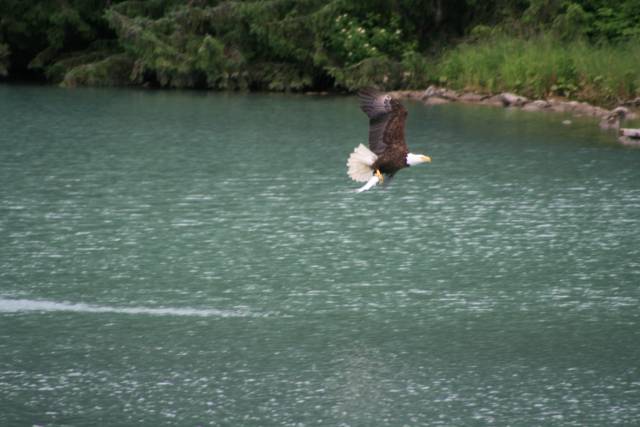 We watch a guy counting the Salmon ñ what a job ñ Iím sure Justin will know what this is all about and then spent over an hour watching the Bald Eagles before finally getting our first grizzly.

The bear is a young one about 3 years old and the locals call him BooHoo.  He wanders along the water in front of the homes there and everyone is very protective of him.  One lady, came and chatted with us and offered us fresh crab which her husband and son were just then carrying up the beach!!

Haines is a small place, very similar to some of the small villages we saw up in Norway.  Great friendly people who made us very welcome.  At the Thunderbird Hotel the receptionist asked me if we wanted a ìQueen bed or a clean bedî ñ he was only joking of course!

Whilst watching the bear, we met a Swiss couple who had been travelling in the Americas for two years. They decided not to go to Deadhorse as they had had enough gravel in South America ñ we have that yet to come!

Everyone is very very interested in what we are doing and tonight we met a couple originally from Cuba and Honduras, although they have both lived in the USA for some years.  They gave us some insight to Buenos Aires ñ apartment for $600 dollars per month and great steaks for only $10!  Looking good.

Back at the Thunderbird Motel, we see the couple from Sleaford still following us.

We were waved off this morning by our Cuban friend and his wife (sorry we didnít get your names ñ great to meet you), to board the ferry for Juneau.  Juneau, the state capital of Alaska has no road access and can only be reached by sea or air ñ how weird is that?  The boat was very comfortable and we had a calm trip down the Lynn Canal.  Sat on deck in the Solarium, this is a covered part of the ship on the top deck which is heated but has no doors and is the place where some people, who arenít lucky enough to have a cabin, may sleep overnight on the longer ferries ñ they may even pitch a tent on deck!  Lucky for us we only have a short trip today and then we have been lucky enough, despite the odds, to get a cabin on the 2 day journey from Juneau to Prince Rupert ñ so no sleeping on deck for us.  We came into Auke Bay just west of Juneau in full view of the Herbert Glacier and after trying a few hotels and B+Bs we finally found somewhere to stay the night.

Sitting on at the Wharf having lunch we are bemused by the size of the cruise ships in the bay.  There are only four of them but they carry 14,000 people ñ unbelievable.  The population of Juneau is only 32,000 so it nearly doubles when the cruisers arrive! JC surprises me by booking a Whale Watching trip for tomorrow!!  Wow!  That evening we go back to the wharf and have dinner at The Hangar overlooking the inlet, watching the float planes take off and land and the salmon jumping.  Himself is in his element ñ all of this to see and Halibut and Heineken for supper.  The local people we meet are very friendly, especially when they hear that we are not on the cruise ship and how far we are travelling.  One guy even offered us his seat at the bar as we are ìguests in his townî  bet you wouldnít get that in Beverley or Hull!!!  As we were about to leave John met Ivan and Lynsey from Cape Town, fascinated by what we are doing ñ they invited us to visit them whenever we are in the area ñ you said it would happen Nikki ñ maybe one day who knows?

The cruisers are all over town this morning ñ doing their shopping and arranging trips before leaving this evening.  We wander around a little trying not to look like cruisers!  For the local people these visitors bring in an enormous amount of money but I bet they are happy to see them go and can relax and have their town back from mid September to Mid April.

Well, explore, dream, discover is what our trip is all about and today I will have the chance to live out one of my dreams and go whale watching with Captain Larry.  What a fantastic experience ñ no Orcas but 12 hump back whales in what they call a ìbubble netî That means they all have a job to play in what effectively is a choreographed feeing ring. Each Whale can take in 20,000 lbs of food and water on each dive and leave behind only 7lbs, ejecting the water before it hits their stomachs and storing the ret as fat.  An amazing sight, difficult to video with the boat bobbing up and down all of the time but JC got some wonderful photographs.  We got to within 100yds of this group using the gulls as guides.  They follow the pack and pick up the fish that the whales miss, sometimes getting caught in the jaws of the whales themselves!

Some of the other people on the trip were from the cruise trip and were doing this going dog mushing and taking a helicopter flight over the glacier before they depart at 6pm.  Talk about Monty Pythonís flying circus!

A fantastic day ñ one that I will remember for many years to come.